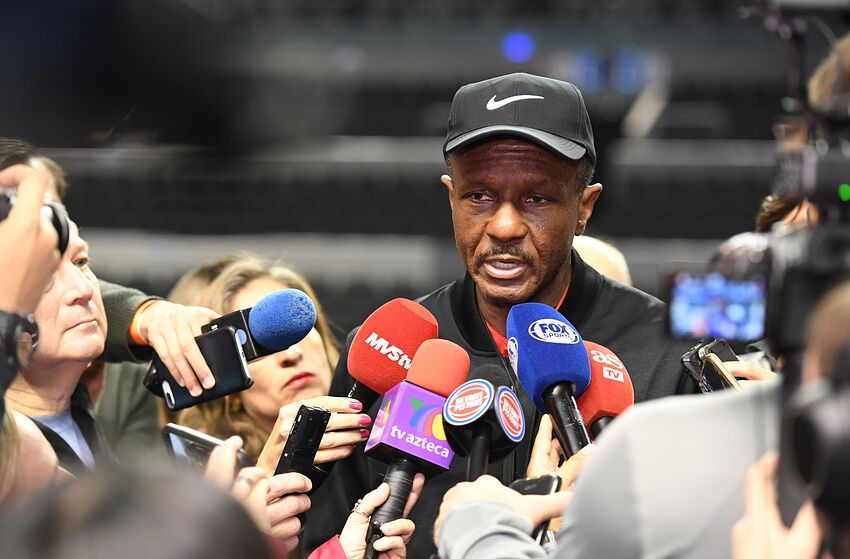 MEXICO CITY, MEXICO - DECEMBER 11: Head Coach Dwane Casey of the Detroit Pistons speaks to the media during media availability as part of the NBA Mexico Games 2019 on December 11, 2019 at the Mexico City Arena in Mexico City, Mexico. NOTE TO USER: User expressly acknowledges and agrees that, by downloading and/or using this photograph, user is consenting to the terms and conditions of the Getty Images License Agreement. Mandatory Copyright Notice: Copyright 2019 NBAE (Photo by Andrew D. Bernstein/NBAE via Getty Images)

2020: The resurgence of the Detroit Pistons by Youssef Elminyawi
Evaluating a Detroit Pistons trade with Philadelphia 76ers for Langston Galloway, Luke Kennard by Aaron Ferguson

The Detroit Pistons have lost the traction they thought they may have this season. If they rebuild, what does it mean for their head coach?

Dwane Casey is now well into his second season as the head coach of the Detroit Pistons. Coming off of a 41-41 year in which the Pistons made the playoffs for the first time since 2016, it was largely assumed that they would be able to build on that progress and make another strong push for the postseason in 2020. However, due to a multitude of injuries including a (presumed) season ending surgery for their star Blake Griffin, things have taken a turn for the worse.

Amidst the injuries and the trade rumors surrounding Andre Drummond, it seems entirely plausible that Detroit – whether they want to or not – could be forced into a rebuilding situation. While speaking strictly about this season alone, it was more or less out of the Pistons’ hands and was nothing more than a result of poor luck. However, the necessity of a rebuild has essentially been plaguing this franchise for the better part of a decade.

The decision to hire Dwane Casey in 2018 was pretty on brand for Detroit’s owner Tom Gores, who has always pledged to take the “win now” route. Casey had just won the Coach of the Year award in Toronto before being fired and Gores wanted to bring that same culture to this Pistons. Casey was signed to a five year contract, and he was brought here to win.

So now that the franchise is finding itself in a bit of an awkward phase, what happens if and when Detroit has to take a change of direction? The bottom seeds of the Eastern Conference are currently so weak that there’s a plausible chance that the Pistons could once again squeak into the playoffs if they so desired, but what would the point of that be?

If it’s a playoff push lead by the younger players, the experience would admittedly do them justice down the line, but then you’re compromising a better draft selection.

Casey’s staple is his player development, and we’ve already begun to see that on display in Detroit. Bruce Brown has taken an offensive leap this season and is hitting his three-point shots with more consistency. He’s essentially doubled his point, rebound, and assist totals from a season ago where he was semi-obsolete on offense. He’s able to drive to the basket with far more confidence.

Even Sviatoslav Mykhailiuk has embraced his new elevated role which to his credit, he was more or less forced into. He’s playing nearly double the minutes he did a season ago and is shooting a reliable 43.1 percent from three-point range. The confidence on his jump shot increases with seemingly every touch that he gets.

Finally, Sekou Doumbouya has slowly begun to burst onto the scene for Detroit. The 19 year old rookie spent a majority of the season playing garbage time minutes or playing in the G-League until the Pistons went on their most recent west coast road trip. He made his first career start against Kawhi Leonard, followed by Draymond Green and LeBron James. He’s a gifted defender who has near perfect shooting mechanics on offense.

Casey has been handling his development well for the most part. If Doumbouya is committing fouls, Casey isn’t going to immediately send him to the bench. He’s not chewing him out after mistakes either, he’s letting Doumbouya figure it out on his own and letting the game come to him, which it has been. He recorded two consecutive double-doubles in his first two outings, and sent Tristan Thompson into the abyss with his earth shattering dunk.

So given Casey’s success in a relatively short amount of time in the regard of development, is this a reason to keep him moving forward? Yes. The problem is that – once again – he was brought here to win. When Casey agreed to sign a five year contract he did it under the impression that the Pistons would be trying to turn themselves into a contending team.

With that reality more or less going out the window, pursuing a buyout doesn’t exactly seem like the best route for a team who’s trying to rebuild. When the Pistons parted ways with former coach Stan Van Gundy, it was an amicable decision. Could that wind up being the case again?

In all likelihood it could boil down to what the market interest is on someone bringing in Casey as their coach, and possibly even vice versa. The opportunity to continue to develop Detroit’s younger talents seems like a task best suited for Casey, and with several years left on his contract there’s a chance that by the end of it, the Pistons will have a formidable product if a potential rebuild took a fortuitous turn.

There are too many moving parts in a scenario where Casey is fired. The Pistons are better off retaining his services in order to utilize his developmental talents.